Follow the footsteps of Saint John Paul II, the first Polish pope and one of the most influential historic figures. Discover the history and sights in Kraków that are closely linked to this astonishing man. 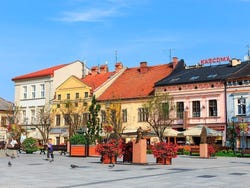 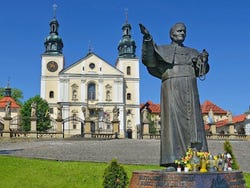 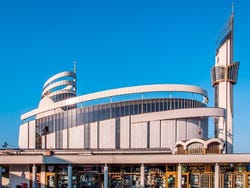 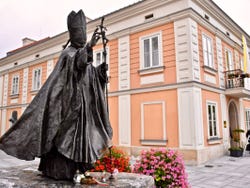 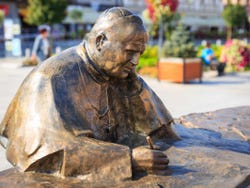 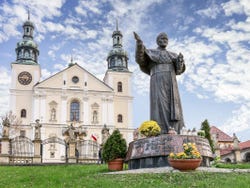 Begin the tour by climbing on an air-conditioned coach and sit back while you are driven 50 km to Wadowice, birthplace of Karol Józef Wojtyła.

Accompany your knowledgeable English-speaking guide to the main square of the town and into the Minor Basilica of the Presentation of the Blessed Virgin Mary, the most ancient temple in Wadowice. This church played a major role in the future pope’s early life, as he celebrated both his First Communion in 1929 and his Confirmation in 1938.

The next stop is Kalwaria Zebrzydowska Park, a very important place of pilgrimage, visited by thousands of people every year. It was declared a UNESCO World Heritage site in 1999 and still houses numerous spiritual events throughout the year.

Head back to Kraków and stop at the Divine Mercy Sanctuary, designated a sanctuary by Pope John Paul II before he became pope due to the remains of Saint Maria Faustyna Kowalska, the first 21st-century Christian saint.

Your guide will explain in detail the life and work of Pope John Paul II, who dedicated twenty-six years of his life to the Roman Catholic church, gaining the affection of millions of devouts.

The guided tour is exclusively in English in Wadowice. The coach ride does not include guide.

Included in the tour

The day tour includes a pub crawl, which includes entrance to 4 clubs and one free shot at each club. You can take part in the pub crawl any day of the week.

Transport from Kraków by minibus.

Admission to the various landmarks included in the visit.

US$ 87.60
No hidden fees or surcharges
Free cancellation up to 3 days before
Book

Free! Free cancellation up to 3 days before the day of the activity. If you cancel under this time or do not show up, you will not be refunded.

One of the best excursions I've done via Civitatis. Guides and driver of 10. Thank you !! Opinion translated. Show original.