Delve into the streets of Krakow on a popular two-wheeler with this 4-hour sightseeing bicycle tour. Enjoy doing sports while exploring this unique town! 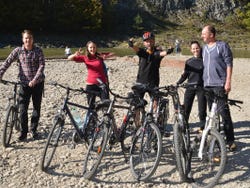 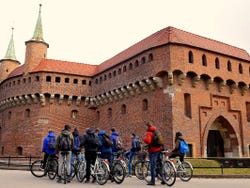 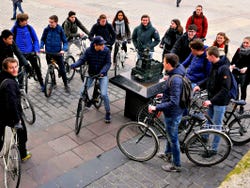 Once you’ve met your guide and group in the city centre, you’ll be handed your bicycle and equipment to begin your tour. Let’s start pedaling!

Discover the streets of Krakow’s Old Town, the liveliest part of this World Heritage City. Continue riding through the hub of the city until you get to the Vistulan Boulevards, constructed to avoid flooding.

Then, head to Planty Park, one of the biggest parks in the city, perfect for those of you who prefer to ride along trails surrounded by lush vegetation. Marvel at the quaint gardens of this green lung.

Keep peddling until you get to Kazimierz, a district brutally damaged during the Nazi occupation of Poland. This area was finished being restored after Schindler’s List was filmed in this destination. Nowadays, it is one of Krakow’s most popular neighborhoods.

Conclude your bike tour in Podgórze district, where Krakow’s ghetto was established during WWII. Your guide will reveal why the Nazis decided to build the enclosure here as you explore its streets on your bike.

This tour will finish at the starting point.

US$ 23.70
No hidden fees or surcharges
Free cancellation up to 48 hours before the service starts
Book

Sabina was great for the tour :-)

I travelled by myself
Show all the reviews
like Free

9.50 / 10 73 reviews
Delve into Jewish culture in Poland on a free 2-hour walking tour of Kazimierz, the most vibrant Jewish quarter in Krakow, home to unique synagogues and more.
Free!
Book
like Free

9.40 / 10 259 reviews
Take in the exquisite buildings and streets on a free walking tour of Krakow's old town and see for yourself why it's a UNESCO World Heritage site.
Free!
Book