The historic central district of Kraków is relatively small and ideal to discover by foot. Thus, unless you’re staying outside the city center, you’ll only find the city’s urban buses useful to get to certain attractions located in the outskirts or in other Polish towns, such as Auschwitz-Birkenau Concentration Camp and Wielizka Salt Mine.

There are 132 municipal bus routes in Kraków that connect various parts of the Old Town with the outskirts. The handiest lines for visitors are the ones that connect Kraków Airport with Kraków: 208, 252 and the night bus 902.

To learn about the city transport fares, read our article on the bus and tram fares in Kraków

The extensive network of urban buses in Kraków runs generally from 5am to 11pm every day. 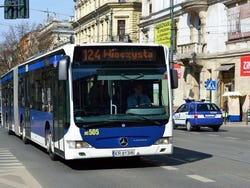