Since it was inaugurated in 1269, the church has been severely damaged by various fires and subsequently rebuilt in different styles. Consequently, the edifice is a curious mix of styles and decorations. Nowadays, it presents several gothic elements that blend with other neogothic details. One of the highlights of the church are the polychromatic walls and the stained-glass windows.

St. Francis’ Basilica was one of Karol Wojtyła's favorite churches before he became head of the Catholic Church between 1978 and 2005. In his memory, a plaque was placed on his preferred bench where he used to sit as bishop, archbishop and cardinal.

The Church of St. Francis is one of the most distinctive churches in Kraków. It has managed to preserve its charm and authenticity throughout the centuries and restorations. 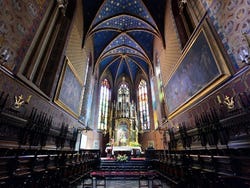