This peculiar-shaped temple has a convoluted past. The construction of Lord's Ark Church was agreed upon by the neighbors of Nowa Huta during the 1950s when Poland was under Communist control. However, the authorities refused to grant building permits for a Roman Catholic Church in the socialist realist neighborhood of Kraków, which led to violent protests by the residents of Nowa Huta. In 1957, a wooden cross was placed on the location they had chosen for the temple, but permission was still not granted.

Despite the freezing weather, Bishop Karol Wojtyla started celebrating mass outside on the chosen site in 1960. Seven years later, permits were granted and volunteers worked on the church for ten years with subsidies from all over the world, until it was opened to the public in 1977.

The temple is as surprising outside as it is inside. The exterior is covered by over 2 million stones and the interior is mostly made of wood, which will remind visitors of the hull of a boat. In the center of the church is a remarkable crucifix.

A special church for a unique district

The Lord’s Ark is an exceptional church that stands out because of its modern and abstract shape. If you visit the Nowa Huta neighborhood, we recommend you stop by this church. 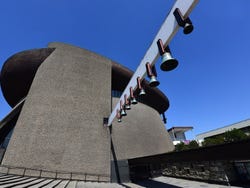 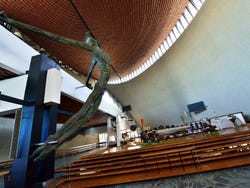