The Main Market Square (Rynek Glówny in Polish), designed in 1257, is considered Kraków’s city center and has an important historical, cultural and social significance. Throughout the centuries, traders would sell their goods here. And it has also been a compliant witness to numerous events, ceremonies and public executions. During the German occupation, the square was renamed Adolf Hitler Platz.

Enclosed by elegant townhouses and Medieval palaces, the square is one of the city’s main meeting points for both locals and tourists. It is bustling with life all day long.

Apart from its picturesque terraces and beautiful horse carriages that await their next customer, the Main Market Square is home to the following landmarks:

Heart of the city

The Main Market Square in Kraków is the city’s most important historical site. It is worth exploring both during the day and at nighttime, where you’ll enjoy its lively atmosphere and its charming open-air bars and restaurants. At nighttime, the buildings flanking the square and the Cloth Hall are beautifully lit up. It is considered by many as one of the most romantic corners of Kraków.

If you visit the square just before the hour changes, you’ll enjoy St. Mary’s Church hourly bugle call or “Hejnal Mariacki” in Polish. 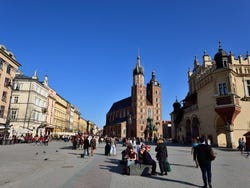 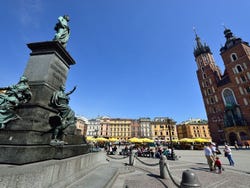 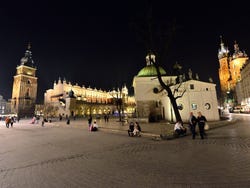