St. Mary’s Church has a grandiose façade flanked by two different sized bell-towers. The tallest tower, adorned with a gilded crown since 1666, is known as “Hejnalica”. In the past, it rang when the city doors opened and closed every day, or when the city was under attack or when a fire broke out.

Nowadays, the bell plays the “Hejnal Mariacki” on every hour with a trumpet. The melody is always abruptly stopped to commemorate the trumpet player that was killed when he tried to alert the citizens that Kraków was being besieged.

One of the highlights of the interior of the church is a wooden 12-meters-long fifteenth-century altarpiece by the artist Veit Stoss. It has over 15 carved figures and is the largest in Europe.

St. Mary’s Basilica is one of the most representative symbols of Krakow and is worth visiting.

In summer, visitors can climb to the observation deck of the Hejnalica Tower. The deck offers stunning views of the city. Travellers can also visit the room in which the trumpet player was killed. 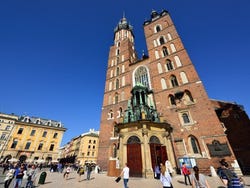 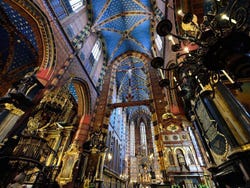 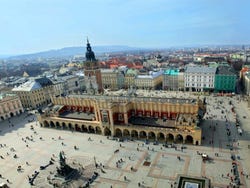 On foot from the Main Square