The thirteenth-century defensive wall was renovated throughout the centuries, and during its culminating point, it measured two-miles-long, was three meters thick and had eight gates and thirty-nine towers. The moat along the whole fortification was six-meters wide.

During the nineteenth century, the no longer useful fortifications were brought down and the charming Planty Park was designed on the site.

The fourteenth century Barbican, standing by its side, was also part of Kraków’s defensive system.

The city walls were demolished, except for a fragment of 200-meters that includes St. Florian’s Gate and Carpenter’s Tower.

Visitors can climb on the defensive walls to see an exhibition about the ancient fortification that features images of the parts that were flattened. 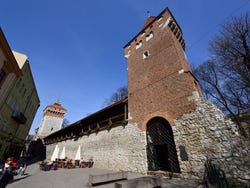 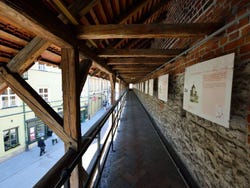