Although there are several versions of the end of this popular Polish legend, the most famous tells the story of a devious shoemaker that fooled the dragon by placing sulfur under the skin of a dead goat.

The dragon ate the skin and died poisoned by the sulfur. Thanks to the cobbler, the inhabitants of the region could finally live freely.

Nowadays, the lair of the dragon is open to the public in summer. Visitors will access the cave through an old well and descend 21 meters to explore this unique site. The cave runs all the way to the banks of Vistula river.

At the exit of the cave is a large dragon-shaped statue carved in 1971. It is one of the most popular tourist attractions, especially for children, as the dragon expells fire out of its mouth every five minutes. 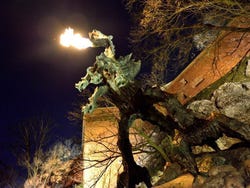 At the foot of Wawel Hill, on the bank of Vistula river.

April - October: 10am to 5pm or 7pm (depending on the season).
November - March: closed to the public

Pharmacy Under the Eagle Church of St. Peter and Paul