Commissioned by King Casimir III the Great in 1335, the Basilica was completely devastated during the Swedish invasion of Poland in 1655. In the following years, it was restored thoroughly and nowadays, offers an attractive combination of Gothic and Baroque architecture.

Some of the most noteworthy parts of the temple include the high altar, the Renaissance-style mausoleum (Władysław II Jagiełło), and the boat-shaped pulpit that sways in the waves. This Roman Catholic church also houses the largest organ in the city.

The Corpus Christi Basilica is believed to be among the most beautiful Baroque-style temples in Central Europe. It is worth stepping inside this unusual church while you visit the Old Jewish Quarter of Kraków (Kazimierz). 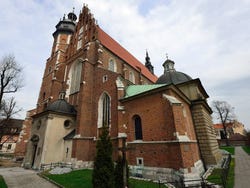 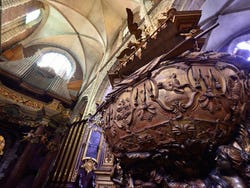