When the Germans established Podgórze, the largest ghetto in Kraków, they advised the Poles to leave the district. Tadeusz Pankiewicz, a Polish pharmacist, owner of Under the Eagle pharmacy declined the offer to run another pharmacy on the non-Jewish side. Under the Eagle was the only pharmacy that remained open in the Ghetto.

Under the Eagle became a strategic location for the imprisoned Jews that would be frequently given free medication by Pankiewicz and a safe meeting point for the Jewish leaders.

The pharmacist saved numerous lives by providing the older generations with hair dye to disguise their identities and sedatives to the children to help them hide. The pharmacy survived the war and closed in 1967. Years later, it was transformed into a very poignant museum.

The pharmacy was restored as it was during the war and houses a permanent exhibit that reflects the decimation of the Jewish people and how countless Jews were rescued by Pankiewicz.

Less impressive than Schindler’s Factory, the Pharmacy Under the Eagle is still worth discovering. 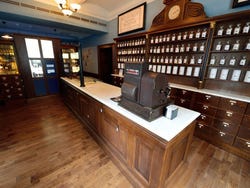 Pharmacy Under the Eagle 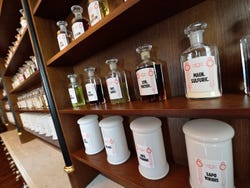 Products in Pharmacy Under the Eagle
2See photo gallery